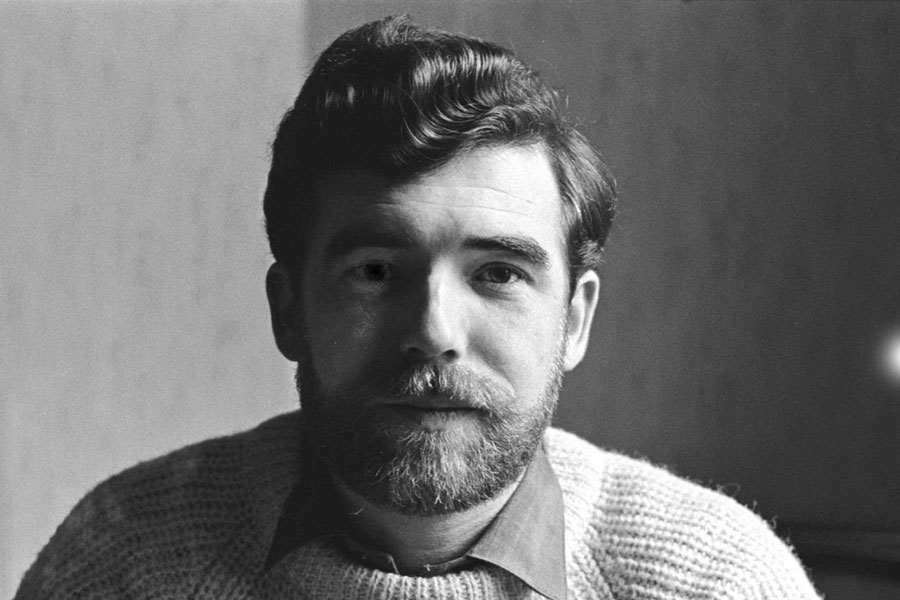 Louis Killen, born in 1934 in Gateshead-on-Tyne, County Durham, in the northeast of England, comes from a family whose main form of recreation was singing. He has been a professional "folksinger"—singer of traditional songs and ballads—since 1962.

His interest in ships (all types and sizes) began at the age of eleven after reading Arthur Ransome's Swallows and Amazons series of books. Prior to visiting the United States he crewed for several years on a friend's fishing boat, a coble, traditional to the northeast coast of England. While in the States, he has crewed on the brigantine Black Pearl, of Newport, Rhode Island, and was chanteyman (also a deckhand and ship's carpenter) on the Hudson River sloop Clear water during her trip from her builder's yard in Maine to her home port of New York.

Mr. Killen lives in England where he pursues his career as a singer. His greatest ambition is to own and sail a large sailing vessel.

The Wavertree, earning her keep slogging her way 'round the Horn, is the ship pictured on the cover by Oswald L. Brett. This 279-foot full-rigger is being restored for installation on the New York City waterfront, by the SOUTH STREET SEAPORT MUSEUM, 16 Fulton Street, New York, N. Y.

Oswald Longfield Brett was born in Australia in 1921. He has served as a deck boy on the Australian coast and Pacific Island Trade, and on deep water ships from square-riggers to ocean liners. As an artist he portrays the passing scene of the maritime nations. In 1964, he was commissioned to paint the bark Kaiulani; the picture was presented to President Johnson by President Diosdado Macapagal of the Philippines at the White House.

The Cape Horn Breed
"Week after week for a month the Westerlies screamed at her. Sails blew out. Men were injured. She head-reached under shortest canvas down towards 60 S., and the Antarctic winds caused frostbite among the crew. Six could not work through this cause alone: there was no remedy. Still the gales screamed at her, the seas swept over that enormous area of main deck. More sails blew out. They shifted the rags, dragged fresh sails aloft. The coal cargo shifted. The sea smashed over her from astern and stove in the wheel, damaging the steering gear. Some of the heavy iron spars smashed like match sticks."

The men who drove the last great square-rigged sailing ships westward 'round Cape Horn, from Fifty degrees South in the Atlantic to Fifty degrees South in the Pacific, were a special breed. Their work was perilous, their wages low, their food and quarters poor. Of many nations, of varied backgrounds, the men in the ever-smaller crews were bound together by hard times, tough discipline, and loyalty. Their songs reflect their lives.

From the preface to The Wavertree: an Ocean Wanderer © Alan Villiers 1969

Songs of the Cape Horn Road
Sailorjohn never sang chanties for pleasure only. A chantey's sole purpose was to make the work go more easily, and hard, often brutal, work it was. The lyrics were rough, many times obscene, for a hairy joke in the song would lighten the heart and therefore the job too. Yet there is a great majesty in many of the melodies, such as "Blood Red Roses".

The songs sung, perhaps even created, around the forebitts by the off-watch on balmy nights in the trades or in the fo'c'sle during stormy winds, often contain as much beauty as bawdiness in both words and music. They show a sensitivity found among rough men when they turn towards contemplation. Songs such as the lament for Franklin, lost in his tragic search for the North West Passage, can hold up against any "art" song.

Here are but a few of those songs, with all the roughness, and beauty too.

ROUNDING THE HORN: This fore-bitter seems to have been popular on both British and American ships, though the name of the ship and the port of sailing vary from version to version. In American versions she sails from Boston; in others from Bristol, England.

SUZY ANNA: Related to the windlass chantey "Santy Anna", but here sung for working the capstan.

SOUTH AUSTRALIA: A capstan or pump chantey. In the Clearwater it was used as a hand-over-hand halyard chantey, with the crew hauling on the mains'l halyard during the chanteyman's solo parts as well as on the chorus parts.

OFF TO SEA ONCE MORE: Whaling boats, like many of the transatlantic packet ships, had reputations of being "blood-boats", with bad food and pay, worse conditions, and hard masters who maintained authority with the hard end of a belaying pin. As a result, most of them were crewed by men in debt to (if not shanghaied by) boarding-house masters. This forebitter, with its advice to give up the sea—advice inevitably thwarted by pimps, whores, drunkenness, and boarding-house masters—was sometimes used as a pump or capstan chantey.

WHISKEY JOHNNY: A stamp-and-go chantey for hauling at the braces, but might have been used at the 'halyards occasionally.

BRING'EM DOWN: A halyard or sheet chantey.

ROW, BULLIES, ROW: Often used as a capstan chantey, this rousing forebitter has two main versions—the one sung here and another where the trip starts in Liverpool, then to New York where the luckless sailor gets himself shanghaied on a "three-skys'l-yarder bound south 'round the Horn".

THE FLYING CLOUD: This "confession" ballad was well-known on the Cape Horn square-riggers but was also a firm favorite on fishing schooners sailing out of northeast ports of America to fish the Grand Banks. I had occasion, during a concert given on Pier 16 at South Street Seaport, to talk with one of the audience, a fisherman on the scallop boat moored close by. He hailed from Gloucester, Massachusetts, and as a boy and young man had sailed on schooners out of that port. He knew most of the songs and chanties sung at the ^concert, and during the course of the conversation swapped verse for verse many other forebitters including the above ballad.

THE DREADNOUGHT: A forebitter sometimes used as a capstan chantey. This packet ship, owned by the Red Cross Line, was launched in 1853, and under the command of Captain Samuels held the record for transatlantic crossing. Despite the tone of the song, she was known among Liverpool seamen as a blood-boat whose captain and mates wouldn't hesitate to "blow down" any of the crew who didn't jump to when orders were given.

RUEBEN RANZO: A halyard chantey. No one seems to know who Rueben Ranzo was—though some say a "Portagee" and others a tailor—but wherever he came from he is the archetype of lubbers who make good, at the expense of the deckhands if one judges by the last verse.

PADDY WEST: This popular forebitter/capstan chantey is about one boarding-house master who guaranteed captains that he would supply trained seamen for their ships. His training scheme, which took a week, is aptly described in this song. His "able seamen" were usually demoted after a few days at sea, and "Paddy Wester" is still a term of derision for useless seamen.

THE TRIM-RIGGED DOXY: This forebitter was originally a landsman's song called "The Rambling Soldier" which told the tale of a young man who had a commission from the king to wander the country seducing young ladies. In the sailor's version he gets his comeuppance with a dose of the dreaded social disease.

THE SHIP IN DISTRESS: This song was once a broadside, one of many, which dealt with cannibalism among seamen cast adrift—a parody was even written by Thackeray, called "Boy Billee". The last case that I know of was off the barrier reef of Australia in 1916, when the crew of a tramp steamer, adrift in life boats, ate the cabin boy.

SALLY RACKET: Halyard chantey. This is a West Indian version of "Cheerily Man".

BLOOD RED ROSES: A halyard chantey popular in Cape Horners. The title is thought to refer to soldiers; in the Peninsular War and later, at Waterloo, Wellington's British army was called "the bonny bunch of roses". Some of the versions have "come down" or "pull down" in the chorus line, implying that soldiers on board transports had to do their share of hauling on the lines.

SHORT JACKET AND WHITE TROUSERS: A recurring theme in many sailor songs is that of young women dressing up as men and signing on board some ship "to seek their own true love across the raging main". Perhaps much of this was wishful dreaming on the part of men grouped together for months on end without sight of the opposite sex, but there are records of women joining ships—in fact, one ended up commander of a privateer. Usually the "maid" in the story ends up "in the family way", but here there is a fine twist to the story.

THE LEAVING OF LIVERPOOL: This fine forebitter-cum-capstan chantey was — naturally — a great favorite with ships' crews sailing out of the River Mersey port, especially if they hailed from that town.